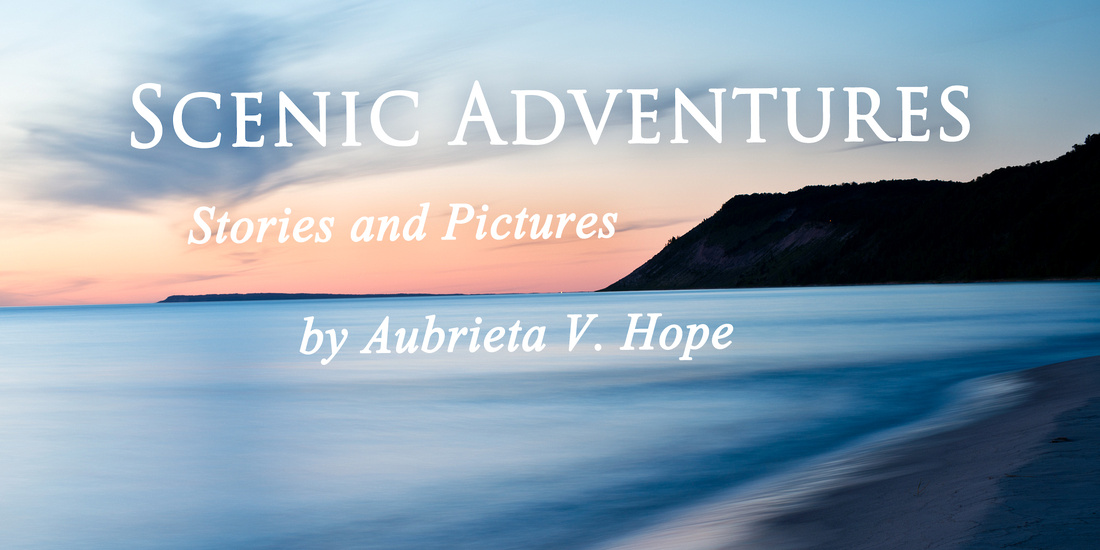 "Autumn Sunrise at Lake of the Clouds: The Story Behind the Shot"

"Autumn Sunrise at Lake of the Clouds: The Story Behind the Shot"
By Aubrieta V. Hope, originally published on Northland Adventurer's website

Maybe there are prettier places than Lake of the Clouds Scenic Overlook in Michigan's Upper Peninsula.  And maybe there are better times to visit than October when mild days and cool nights paint the hillsides with brilliant color.  But, as a landscape photographer, I haven't found a better place or a better season.

In the fall of 2013, I headed to the Porkies with my tent and waited out five days of rain in hopes of photographing a sunrise there.  On the sixth day, I got my chance.  Though I arrived long before dawn, I was amazed to find a large crowd of photographers already gathered, waiting for the light.  Shooters were shoulder to shoulder, four or five deep on the main overlook (where all the pretty calendar pictures are shot).  I took in the scene: headlamps, knapsacks, camera gear, coffee cups, and conversation.   On the rock outcropping above the main overlook, photographers were lined up like skirmishers ready to defend the hill.  I wasn't even fully awake and yet, here I was, lost in the tripod forest.

Everyone was friendly, but it was tough to find a shooting position.  So, I scrambled down the rock in the dark, dropping below the outcropping.  Then, I jumped up and down, waving my arms and called to the skirmishers on the hill, "Can you see me?"  They hollered back that they could not see me.  I wasn't in anyone's line of fire.  I had found my position.  As I set up, the night sky brightened and a dense mist rose from the river valley, sweeping across the lake and the hills beyond.  I tried compositions and checked my exposure.  I figured I was ready to shoot.  But when the sun broke across a saddle on the distant hills and flooded the mist with smoky color, it took my breath away, emptying my head of everything but wonder.  I could barely press the shutter.

I thought about the shooters above me and hoped that somebody up there was good enough to capture the scene.   In every direction, the sunrise drama was unfolding.  The mist shifted continuously, changing the light, sometimes blocking the sun, bathing everything in pink and lavender.  Moments later, the mist drifted away from the sun, and golden light hit every tree, rock and ripple on the lake.  I crept forward, tracking the mist that was chasing the sun.  With the mist as a magic filter, the beauty did not end with the dawn.  I shot a long time, until the mist faded away completely.  Climbing back up the rock in the bright light of day, I was sure I had captured nothing on my memory cards that would convey what I had seen.  So, I recited what I always tell myself after an uncertain shoot:  You were there.  You saw it.  Maybe you didn't get the shot, but you were there.

A couple of years later, my best shot from that morning was selected as one of the winners in the "Pic Your Path" contest sponsored by the Upper Peninsula's Facebook page.  (Ultimately, that win resulted in a free trip to Isle Royale National Park, sponsored by UPTravel.org, but that's a story for another day!)

This image has received quite a lot of attention online and is now featured on the Explorest app.  I'm delighted to share my picture with others who love the U.P.  My shot is true:  the clouds really were that dramatic and the mist actually was that golden.  But I have to say that, honestly, my picture doesn't even come close to showing the beauty of that smoky October morning at Lake of the Clouds.  However, I was there.  I saw it, and so too, now, in a little way, have you.

Sleeping Bear Dunes National Lakeshore sparkles in winter!  Although the summer crowds have vanished, the scenic drama continues. Strap on a pair of snowshoes and meet your inner explorer! Snow season is an especially lovely time to visit the Park's woodland trails, Lake Michigan beaches, and scenic overlooks.  I published a story on Northland Adventurer with images and ideas to inspire a fun winter getaway at this beautiful national park.

Though best known as a summer beach destination, Michigan's Sleeping Bear Dunes National Lakeshore sparkles in winter! The crowds of vacationers have vanished, but the scenic drama continues.  Ice sculptures form on the beaches, every tree in the forest sparkles, and the dunes become snow-swirled works of art.  Traversing deep snow can be a struggle, but with snowshoes, those drifts are no longer obstacle courses.  Strap on a pair of snowshoes and meet your inner explorer!  Blaze your own trail!  Over the next hill or through the woods, snowshoes take you where you want to go. 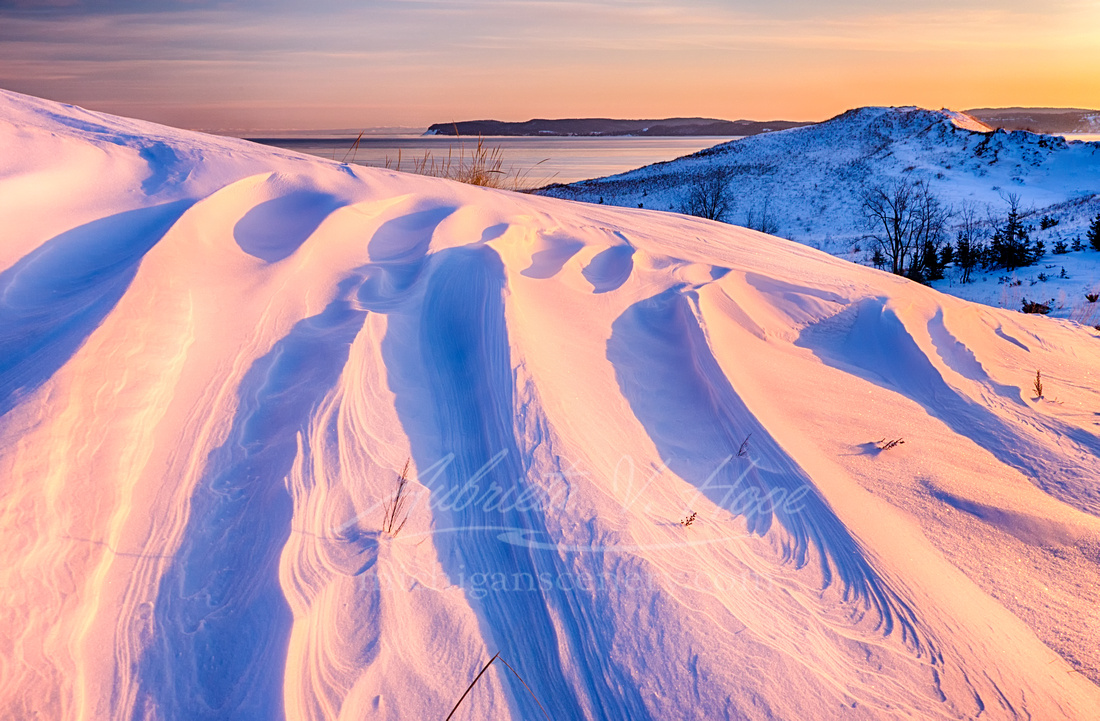 Snow season is an especially lovely time to visit the woodland trails, Lake Michigan beaches and overlooks at Sleeping Bear Dunes.  With the absence of songbirds and vacationers, these scenic areas are quiet, but you won't feel alone.  Throughout the winter season, shy creatures venture out and stitch mysterious tracks in the snow, revealing the presence of wildlife that summer visitors rarely notice.  Some of the prettiest panoramic views can be seen from the Pyramid Point and Empire Bluff trails.  If you're up for a longer hike, consider snowshoeing the Pierce Stocking Scenic Drive.  It's closed to vehicular traffic in winter, so you won't have to dodge any cars on your trek.  Another spectacular snowshoe destination is Sleeping Bear Point, accessed by the Dunes Trail just west of Glen Haven Historic Village.  The Lake Michigan shoreline also offers amazing scenery, and snowshoes provide good traction for traversing icy beaches. Wander at will, but use caution.  Never venture onto the lake, even if it looks frozen.

A good place to begin your Sleeping Bear Dunes snowshoe adventure is the lakeside village of Glen Arbor, centrally located at the heart of the national lakeshore.  Glen Arbor is tiny but vibrant, even in winter.  You can rent snowshoes and poles from Crystal River Outfitters (www.crystalriveroutfitters.com).  Stock up on snacks at Anderson's Market (full-service grocery and deli) or at the Cherry Republic (cafe and market).   If you're hungry for something more substantial, grab a booth at Boonedocks restaurant or at Art's Tavern.  Once outfitted and fortified, you can snowshoe from Glen Arbor to the Dune Climb, Glen Haven Historic Village, or the Pierce Stocking Scenic Drive via the Sleeping Bear Heritage Trail.  This recently-constructed paved trail begins just a few blocks from downtown Glen Arbor and runs 9 miles to Empire.

Ready to explore?  Every Saturday afternoon throughout the winter months, Sleeping Bear Dunes National Lakeshore offers ranger-led snowshoe hikes which begin at the Visitor Center in Empire.  If you don't have your own pair of snowshoes, you can borrow them free of charge for the afternoon.  Advance registration is required; call (231) 326-4700 x 5010 to sign up.  For detailed trail information and maps, visit www.nps.gov/slbe/planyourvisit/ski.htm. 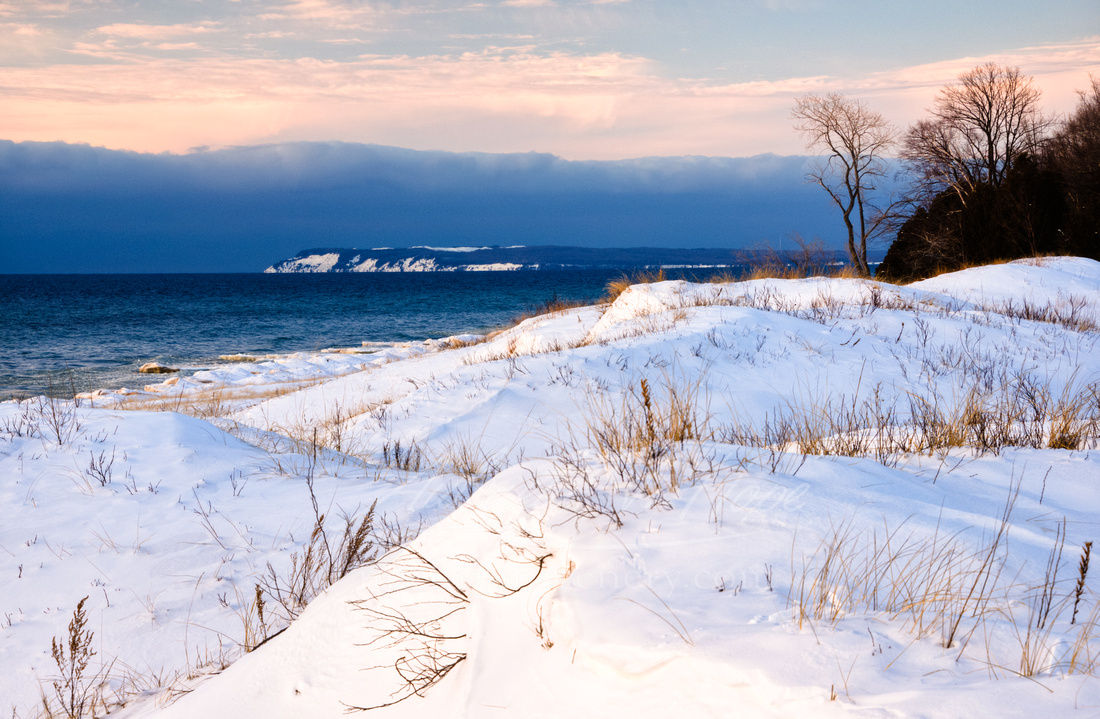 "Those who have never seen Superior get an inaccurate idea, by hearing it spoken of as a lake.

Though its waters are fresh and crystal, Superior is a sea."

Lake Superior is vast, inspiring and inviting.  It is a place of quiet beauty, and it is a place of dazzling transition.  Sometimes Superior is still, and sometimes it curls into massive waves that thunder against sand and rock, carving mysterious caves into sandstone cliffs.  On stormy days, the light changes quickly, with dark clouds yielding to double rainbows, here and gone in a flash.  On sunny days, when the wind is calm, diamonds glitter across its surface and its coves are Caribbean blue.  Superior has a way of holding your gaze, whether the day is mild or freezing.  Within a stone's throw of this great lake, the land is surround-sound glorious.

As a landscape photographer, I am naturally drawn to Lake Superior, especially near Munising in Michigan's Upper Peninsula.  I travel with my tent and camp at water's edge, listening to the waves at night.  On clear mornings, I rise before dawn, photographing the sun as it washes the shore with warm light and casts Superior's diamonds into gold.  I breakfast on wild blueberries, and  hike miles along the shore, just to discover what it looks like around the next bend.  Most nights, I stay out late, long past sunset.  One August evening, I saw the sky brighten moments after darkness fell, then watched the northern lights dance above Superior for hours.

There is no better place to experience Superior's shores than the area around Munising, Michigan.  Located at the very heart of U.P. adventure,  Munising is the gateway to dramatic scenery and family fun.  With Pictured Rocks National Lakeshore, the Hiawatha National Forest, and Grand Island as neighbors, the possibilities for recreation and renewal are almost endless.  Miles of hiking trails, towering colorful cliffs, more than a dozen waterfalls, several historic lighthouses, and thousands of acres of forest beckon.

Launch a kayak, sling a backpack over your shoulders, strap on snowshoes, catch a boat tour of Pictured Rocks National Lakeshore, lift a pair of binoculars, or just spread a picnic blanket on the beach.  Munising has everything (except crowds and traffic jams) and offers small-town hospitality year-round.  To plan your visit, check out www.munising.org or www.exploremunising.com.

Sleeping Bear Dunes National Lakeshore is gloriously beautiful ... and silent ... in winter.  One of the best ways to access that beauty without disturbing the silence is to set off on snowshoes.  I published a blog on Pure Michigan's website to inspire snowshoe adventures at the "Most Beautiful Place in America".

"What Happens When Six Photographers Meet in Michigan's Upper Peninsula"

"Autumn in the Upper Peninsula:  A Tale of Six Shooters"

Once upon a time, six shooters ventured north to the Tripod Forest, a fabled land of brilliant fall color in Michigan's Upper Peninsula.  All were packing:  most brought Nikon's, but two carried Canon's.  They loaded up minivans, SUV's and 4x4's, bringing filters and flashlights, bug spray, raingear, ice scrapers, and backpacks.  About half of them planned to find a campsite someplace and the others made hotel reservations.  Some had never met, but were destined to.  A few of them hoped to cross paths somewhere.

It was late September and their only plan was to find and follow the color.  Frost was in the forecast.  The time was now.  The 2014 Michigan Fall Foliage Convention had begun!

Their program?  It all depended on the trees, sun, wind and cloud cover.  Some headed for the western U.P. first, others tracked to central inland areas.  In this rugged and beautiful land, photo opportunities crop up everwhere.  Cell coverage, however, can be scarce, especially in the remotest areas.  So, happenstance and coincidence tend to be the best, if not the only, methods of connection.  That certainly proved to be true for the shooters in our tale:  Neil Weaver, Craig Sterken, John McCormick, Phil Stagg, Ken Keifer, and Aubrieta Hope.

Over the next couple of weeks, with surprising frequency and with almost no planning, these six shooters ran into each other on rocky outcrops, at the end of nearly impassable two-tracks, in parking areas, and other likely and unlikely places.  They shared location tips, stories of shots taken and shots missed, and bucket lists of dreams on the front burner  There was no conference schedule.  Everyone had their own agenda.  But there was plenty of camaraderie and inspiration.  And, there were rescues, for example when Aubrieta fractured her ankle on a trail and was glad to be shooting with others at the time.  Outdoor photography is an unpredictable pursuit.  It's nice to have friends in the vicinity!  So, maybe this was more of a round-up than a convention, all these creative mavericks meeting on the beaches and overlooks, sharing tripod space and good light, and bagging some great shots.